While touted as a ‘vegetarian bistro’, Meze119 actually includes a unique array of vegan menu items. Additionally, they’re extremely flexible and conscientious and often cater to vegan requests with slight menu modifications. Having been to Meze119 a handful of times, there hasn’t been a time that I didn’t like an item from the menu. I think I may have also converted a few friends who turned their nose up at meat alternatives. Having options is nice, isn’t it? Meze119 has a standard menu but often have weekly, or daily, specials. This time around I started with their bourekas appetizer – light and flaky pastries filled with sweet potato and fake bacon. For a main course tried the special, Vegan BBQ Pork Chops with sweet potatoes and crispy onion topping. It was very decadent but balanced and the pork chops were actually moist, not dried-out and drenched with A1 sauce as I vaguely remember growing up.

They have a great wine selection to accompany dishes and also include a kid-friendly menu for smaller portions. 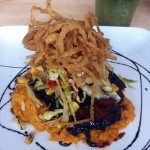 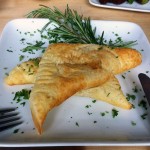 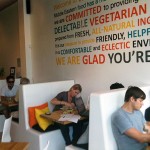