Took a trip over the bridge yesterday to finally check out Leafy Greens Cafe off of Central Avenue in St. Pete. Atmosphere at the cafe was completely laid back and relaxing. Decided to sit outside under some shade with Brooke as our waitress. She explained the specials and other recommendations from the menu, it didn’t take long to find a few things to try out. The special of the day was the Zucchini Spaghetti (with white Alfredo sauce); decided to share that dish along with Tacos with a side of Pineapple-Cucumber Gazpacho, washed down with cold Coffee-Mint black (infused) tea.

While trying out the spaghetti, I realized there was absolutely no pasta included with the zucchini, yet had me fooled for a while because it had a very similar consistency to regular spaghetti. The Alfredo sauce (yes, also dairy-free) wasn’t too heavy and the salty ‘nut’ cheese definitely complimented what replaced the marinara option normally included with this entree. Next was the cold Pineapple-Cucumber Gazpacho. I’ve had gazpacho before but never with pineapple…perfect tang along with the cucumber left me wishing I had an option to order more.

The tacos were beyond amazing! Oh, and the entree actually came with a smaller side of gazpacho so, SCORE! In lieu of a tortilla shell, I normally expect vegan tacos to be served with flimsy iceberg lettuce leaves. Instead, they were artfully presented in over-sized romaine lettuce leaves with cashew hummus and a chipotle cashew dressing. Tacos served in lettuce tend to be extremely messy but I don’t remember getting a drop of dressing over my hands or any filling falling out of the lettuce – as clumsy as I can get while hungry. 🙂 Cold tea was a great choice with the meal. There was a subtle hint of chocolate in the mint tea, nothing too overpowering and good for a warm day. Decided to end the meal with a desert and tried Apple Cobbler. It was a hard choice between that and the Dark Chocolate Cake. The portion was perfect with thin slivers of apple along with a light cinnamon crumble – left completely satiated; tastebuds, stomach, and all!

Plenty left on the menu to go back and try (especially that chocolate cake). Expensive? Maybe a bit for lunch. Worth it? Most definitely…it’s rare when so much attention is paid to preparation and presentation of great vegan dishes. I plan on coming back to visit Leafy Greens Cafe again and surely recommend to all. Leafy Greens Cafe is located at 1431 Central Ave. St. Petersburg, FL 33705. 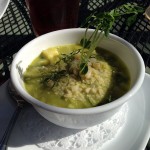 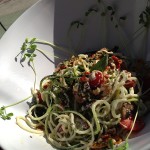 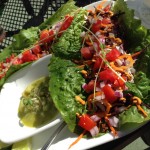