Okay…my mind is a bit blown. It’s been quite some time since I allowed myself to indulge in fast food. Growing up in the midwest, I worked summers as a lifeguard at the city pool and remember Taco Bell being one of our favorite lunch spots. My poison, Nachos Bell Grande. Even then, I knew it wasn’t ‘good’ for me but would often make food runs and get multiple orders for the guards to scarf down between shifts.

Na-cho ordinary treat! Not until last night did I get the exact same cheesy Taco Bell sensation when I attempted a modified version of Elianni’s Vegetarian Nachos recipe with their Veggie Roll/Pâté combo, using dairy-free jack cheese from Daiya and vegan sour cream from Tofutti. I made it for a party so doubled some of the ingredients. Think the trick was to dice the vegetable mixture super fine by hand, or with a Vidalia vegetable chopper. 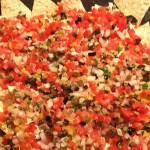